On 9th June 1928 – the feast of St Columba – Alec Ritchie wrote from Iona to his old friend, the writer Lucy Menzies:  ‘Dear Miss Lucy,  Your Postal Order 15/- , for trinkets retained, was received with many thanks. Please accept, with our very kind regards, the Map. You cannot call it a guide book.’

The ‘trinkets’ will have been items of finely chased silver or beaten brass made by Alec and his wife Euphemia in their workshop, Iona Celtic Art, since 1899.  The equally modest reference to the new publication Iona A Map belies the fact that today – nine decades later – it stands alongside the Ritchies’ justly renowned craftwork as a collector’s item and key text in its own right. Much had already been published about Iona but this was the first book to be edited and designed on the island itself. That first edition, in 1928, was followed in 1930 by a 2nd, Iona Past and Present with Maps –  ‘a title more appropriate to its contents’ –  and in 1934 by a 3rd, which had additional notes plus lists of wild flowers and birds. 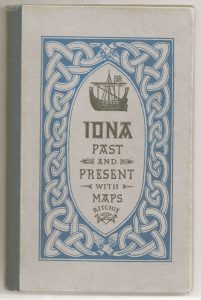 The Ritchies called on friends in the worlds of scholarship and art to help create the contents. The geology section, along with its own map, was contributed by Professor T.H. Jehu; antiquarian James Gillespie assisted with descriptions of the monuments.; naturalist Seton Gordon advised on the botany and ornithology lists. And David Munro Fraser, Chief Inspector of Schools, who was a regular visitor to Iona, championed the project. A Gaelic scholar himself, he also enlisted W.J.Watson, Professor of Celtic at Edinburgh University, to look over the list of place-names.

Artist James Shearer drew the main map, folded inside the back cover of each edition. Detailed views are inset around the edges and, off the island’s coast, are scattered delicate images of sailboats and anchors. People love this map. I have seen it framed on walls and I doubt I’m alone in often consulting it first, before any recourse to the Ordnance Survey. A section of it surrounds a photograph of Iona from the sea, to form the headline banner for this website.

Both the Ritchies had been familiar with island life and landscape since their youth. Euphemia, born in 1862 near Ardrishaig in Argyll, spent her first fourteen years on Shuna where her parents, Robert Thomson and Euphemia Lyon, were sole farm tenants. Effie, as she was usually known, went on to study embroidery at Glasgow School of Art where she met Alec, who was taking winter classes to extend his woodcarving skills into decorative metalwork. They married in 1898 and Effie, who retained deep affection for the small island of Shuna, brought that name with her to the house they built on Iona’s village street.

Alec was born in 1856 in Tobermory, one of seven children. In 1868 the family moved to take up a lease on the St Columba Hotel, Iona – formerly the Free Church Manse – and to work the adjoining farm. His mother, Mary Lamont, was from Ulva. His father, George Ritchie, was a sea captain from a long line of fishermen and sailors, piermasters and lighthouse-keepers. This branch of Ritchies had come from the Buchan coast to the mouth of the River Ayr and thence west to Kintyre. The place-name Ritchie’s Head in Torrisdale Bay is a permanent marker of their presence on that peninsula.

During his teenage years on Iona Alec and his siblings, all Gaelic-speaking, will have helped gather in sheep from the hill ground, stacked hay for winter feed and fished around the coastline. They will have heard news and tales at regular ceilidh places: the Smiddy by the pier or Neil MacKay’s house, Taigh an Tàilleir (now Highland Cottage) on the village street. This family quickly became part of a community where local knowledge and tradition had been handed down over many generations. Learning also figured large. In the school one room held books gifted by visitors for the islanders’ benefit, and doubled as the venue for evening lectures, debates, music classes and concerts.

Alec trained as a marine engineer but, after twenty years at sea, a shipwreck in the West Indies left him with a serious leg injury and forced a return to land. Back on Iona in the 1890s, he was appointed official guide and custodian of the ruins by the Duke of Argyll. When the Iona Cathedral Trust took over responsibility for the historic sites in 1899 they confirmed this post, their agent having learned that Alec was widely regarded as ‘quite an authority on the relics’. He was to carry out these duties with devotion and energy for close on forty years.

Of Alec’s sisters, the eldest, Isabella, had remained in Tobermory with her husband, to bring up their own family in Ulva Cottage. Flora helped her mother run the hotel on Iona where a nearby bothy became The Iona Press in 1887, turning out pamphlets of lore and verse, in Gaelic and English, to sell as souvenirs. Flora supervised local girls whose ornate, hand-coloured borders fringed each page. Georgina married the Revd Archibald MacMillan, appointed to the Iona charge in 1890 and as keen on history and antiquarianism as his brothers-in-law. His own book on Iona, published in 1898, has useful topographical content plus drawings of the monuments by Robert Brydall of St. George’s Art School in Glasgow.

Mary, born in 1853, studied languages and music in Edinburgh and Germany before becoming governess to a household closely related to the last Tsar of Russia. This was around 1872 and she continued tutoring until 1918 when, along with hundreds of other non-Russians, she had to escape via Archangel at the outbreak of the Revolution. She kept in contact with some of her charges, exiled in Paris, where she met them on at least one visit in 1937.

In 1904 the three Ritchie brothers – Alec, Robert and George – attended the opening of Iona’s Public Library. Robert was by then a Church of Scotland minister in Bonar Bridge where Andrew Carnegie was a parishioner. He had recruited his sailor brother George as pilot on Carnegie’s yacht one summer. During this cruise the millionaire’s ear was duly bent as to the need for a dedicated building to house books given to the people of a particularly historic island – thus did Iona gain a Carnegie Library.

Later, Robert bequeathed his own books of Celtic and theological interest, plus a sum of money, to the Iona Cathedral Trust for the specific purpose of founding another library within the restored buildings. Alec and Effie were to do likewise and lived just long enough to know that work had begun on the room above the Chapter House. At the formal re-opening of this collection in 2018, in its newly refurbished room, Ritchie descendants from different parts of the UK attended by special invitation and good wishes came from others across the globe.

Many of these Kintyre, Mull and Iona Ritchies led creative and colourful lives, perhaps none more so than George. He was the one whose whole life was dedicated to the seafaring tradition of his paternal line – and in spectacular style. Aged 14 he was a deckhand on an Atlantic clipper; he was in the crew of the famed US frigate Constitution on her final voyage to Boston; he sailed the 50ton Rockfinch from the Clyde to the West Indies in 36 days, the smallest craft ever on that route.  On China’s Yellow River he survived an encounter with pirates and in the Australian bush he spent time with Aboriginal people.  Once, he arrived back on Iona wearing a fez, perhaps a clue to where that particular voyage might have led him. The family only ever knew he was alive when a telegram arrived: ‘Send £10’.

When at home George was in demand as a spinner of yarns and an entertaining chairman of evening events.  He was as interested in the island’s history as his brothers, endorsing their bold, if impractical, suggestion in a letter to the press that the Schaffhausen manuscript of Adomnán’s Life of St Columba be returned to Iona. George died in 1943, the last of the family to live on Iona. To avoid building restrictions, he had erected a wee dwelling hut below the high-water mark on the shore – within sight and sound of saltwater, to the very end.

Eighty years ago, in mid-January 1941, Alec and Euphemia Ritchie died at Shuna Cottage within two days of each other and were buried together in the Reilig Odhrain. Tributes came from major figures in the arts. Playwright and author Gordon Bottomley wrote of them as ‘faithful friends’ and ‘among the island notables of the time’.  Another admirer was Gilbert Innes, whose donations of Scottish Colourist paintings helped establish the Hunterian Art Gallery in Glasgow University – and several of those works had been given to him by their first owners, the Ritchies.

At the service to their memory the minister described the life’s work of the couple as ‘loyal to the noble and illustrious traditions of Iona and the isles’.  The preface to the first edition of their 1928 book begins: ‘With the help of our neighbours we have prepared this Map of Iona in order that many of the old Place-names rapidly falling into disuse may be preserved.’  With the help of the Ritchies, this project – Iona’s Namescape – will in turn do its best to honour that ambition.