There is a problem with looking at very early sources for evidence of Iona place-names.  Well there are several, but the particular problem that I have in mind at present is that our earliest picture of the island and its landscape is the Life of St Columba, Vita Columbae, written by Adomnán, the ninth abbot, probably in the late 690s.  He wrote his work in Latin.

Sometimes he does give a name in Gaelic, sometimes a Latinised version of a Gaelic name, and sometimes a Gaelic name treated as a lexical item and translated into a Latin term.  We will come to that in due course.  But we might note that an interplay of Gaelic and Latin was apparently a long-standing feature of the literary (and possibly oral) culture of Iona and the Columban familia of monasteries (the federation of monasteries and churches associated with the abbot of Iona).

We see something of this bilingualism in a poem, Amra Choluimb Chille, which looks as if it was written on the death of St Columba in AD 597.  This dating has been called into question recently by Jacobo Bisagni, (2009), but his view that it may date from a later period depends largely on some apparently ninth-century forms, especially in the latter part of the poem, and these may arise from the process of the poem’s transmission rather than being features of the original text.  The Amra contains dozens of words (at least 54) borrowed from Latin.[1] Some of them are personal names, or place-names, mostly with biblical or ecclesiastical associations (numbers refer to the verse and line-number in the poem):

But the poet of the Amra also uses common nouns and even verbs borrowed from Latin in his Gaelic composition, again many of them with a biblical or ecclesiastical background.  These include for example:

This infusion of Latin vocabulary into a Gaelic poem is interesting, but hardly surprising given the Latinity of monastic learning – the milieu from which the poem arises.  Sadly, the Amra tells us very little at all about the landscape or toponymy of Iona.  The island itself is not mentioned at all.  The only reference to anything on the island is to Columba’s grave – a reference which is interesting in itself, in that it indicates an early relic-cult and the expectation of miracles (Clancy & Márkus 1995, 110):

A century later the interplay of Gaelic and Latin works out rather differently in Adomnán’s writing.  Here we have a Latin text, the Vita Columbae, where the author mentions a great many names – personal names and place-names.  Occasionally he will leave a Gaelic name in its Gaelic form, but also offer a Latin translation.  Thus he names a place as Cnoc Angel ‘hill of the angels’, a small rise on the western plain of the island, though he also gives a Latin translation of the name, colliculus angelorum (VC iii, 16).  He names the monastery of Durrow with its Gaelic name Dairmag ‘oak plain’ (VC i, 3), but also translates the name into Latin as roboris campi (VC ii, 2) or roboreti campi (VC 1, 29).  I have argued elsewhere (Márkus 2010) that Adomnán may have rendered his own Gaelic name in the Latin form homunculus in a poem that he wrote; his interest in translating personal names may be seen also in his rendering of the Gaelic name Ernéne ‘little iron one’ as Ferreolus, with the same meaning (VC iii, 23).   Here we see names behaving not as mere fixed labels, but as lexical items which are considered translatable.  Consider the difference between a Spanish-speaker who talks of Oxford and calls it Oxford (pronounced perhaps in a Spanish accent) and one who calls it Muelle de los Bueyes ‘ford of the oxen’.

Though Adomnán is clearly interested in names (personal names and place-names) as bearers of meanings, rather than mere labels, he has another strategy for rendering Gaelic names into Latin, and that is simply to add on Latin-looking endings.  So his own monastic island is Ioua Insula (and note that the modern name Iona is simply a misreading of Adomnán’s Ioua, the common medieval scribal error of u > n).  The island of Coll is Coloso Insula (VC i, 41) and Mull is Malea insula, so at VC ii, 23 we have ‘inter Maleam et Colosum insulas’ ‘between the islands of Mull and Coll.’  Islay is Ilea Insula.  One would be tempted to treat Adomnán’s Latinate endings –oua, -ea and -osum as effectively adjectival, but the case of Coll, with its masculine or neuter ending (as suggested by -o and -um) attached to a feminine noun, insula, would call that into question.

Adomnán also renders some Gaelic personal names by the addition of Latinate suffixes to the Gaelic name, not treating them as translatable but merely making them look a bit Latin, and giving them case-endings so that they can function grammatically in a sentence.  So Diarmait is Diormitius and Fergna is Virgnous (both in VC iii, 23), for example – there are many others – and Adomnán has no interest in translating them.

In this world of Gaelic-Latin fusion, we might now consider one of the stories in Adomnán’s  Life of Columba (VC ii, 4).  It is of interest because it refers to a particular place on Iona as part of a miracle story. While the saint was living on Iona he sat on a monticulo (a small hill or mountain) which is called in Latin munitio magna and saw a dense rain-cloud that had arisen from the sea on a clear day.  The story goes on to tell about the plague that this cloud brought with it, and miraculous cures effected through St Columba, but this need not concern us here.  I am interested rather in Adomnán’s munitio magna.   Typically in Latin this would mean ‘big fortification’.  Sitting on a ‘small mountain’, he must be somewhere on Iona with a long view to the north.  William Reeves noted that there were two sites on Iona which might have been the place Adomnán was referring to (1857, 107).

The first of Reeves’s candidates was the hill now known as Dùn I, the highest point of land on the island rising to 101 metres (NM283252).  It has wonderful views to the north, and is dramatically higher than everything else on the island.   It would make a perfect venue for the miracle story described, except for the fact that it has no trace of any fortification or munitio on it.  As Adomnán uses the word munitio in other places, apparently to refer to fortified sites (VC i, 37; i, 49; ii, 33-35), we might expect the story in VC ii, 4 to be taking place in a fort as well.  For this reason Reeves seems to reject Dùn I as the munitio magna.

Reeves’s second candidate is the much smaller hill called Dùn Bhuirg (though this name does not appear on OS maps, it is at NM264246).  It is only 51 metres high, and is on the west coast of the island – so further away from the the monastery than Dùn I is, but it still has a good view to the north.  This is Reeves’s proposed site of munitio magna.  It is really the only candidate on the island, if we are looking for an actual fortification. 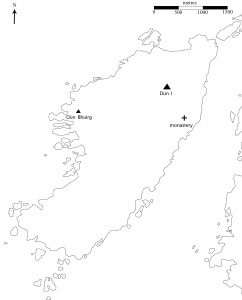 Iona: the monastery with Dùn I and Dùn Bhuirg

One problem with this site is that the fortification that once stood on it, a rubble wall enclosing the summit of the small hill, measured only 35m by 40m, and it is not clear that this would qualify as magna.  The hill itself is not particularly magna, either.  But at least this hill has (or had) a proper munitio on it, which Dùn I did not.

Both the Andersons (VC 98n.) and Richard Sharpe (1995, 319), however, suggest that munitio magna is a translation of Old Gaelic (OG) dún mór ‘big fort’ or ‘big hill’, and that it is a reference to the hill now called Dùn I, the biggest hill on the island.  Adomnán indeed says that it is the monticulus ‘which is called in Latin munitio magna’, suggesting that perhaps he is here simply translating a Gaelic hill-name into Latin, rather than describing an archaeological object on top of a hill.  If that is so, and if munitio translates OG dún, as seems likely, then we have here an early example of dún meaning ‘hill’.

This is of interest because in the seventh century there is no evidence of dún being used to mean ‘hill’ in Irish Gaelic – there is not a single citation of it with that meaning in Irish sources in OG or MG in DIL (dil.ie/19227).  It does at some point acquire the meaning ‘hill’ in Scottish Gaelic however.   We might therefore ask ourselves whether Adomnán’s munitio, if it does apply to Dùn I, where there is no fort, might be a Latin translation of a local place-name in dún in which that element is used in the sense of ‘hill’, as became common in Scotland.

If so, we might ask why this distinction emerged between Irish and Scottish dialects of OG.   Could it owe something to the influence of a British or Pictish word for both ‘fort’ and ‘hill’ which Gaels in Britain had encountered, but was unknown to Gaels in Ireland?   It is worth noting in this context that the Welsh dictionary Geiriadur Prifysgol Cymru gives for *dyn/*dynn ‘hill, height, fortification’ (see also BLITON vol. 2, s.v. dīn).  We know that Iona had several churches in Pictland in the seventh century, which would have provided plenty of opportunity for the Gaelic-speaking monks of Iona to have been influenced by a Pictish word such as a hypothetical *dīn to influence the way they used Gaelic dún.  Iona also had monks in Northumbria in the seventh century (and English monks on Iona in the sixth century if we can trust VC iii, 10 and iii, 22) in whose native Old English dūn meant ‘mountain, hill’ and this may have influenced Iona’s usage of Gaelic dún.

There is much that is uncertain here.  We cannot be sure that the events on munitio magna took place on the hill now called Dùn I rather than on Dùn Bhuirg, nor therfore that the bigger hill was once called *Dún Mór as my argument requires.  And it is possible that, even though archaeologists have found no evidence of a fort on Dùn I, Iona monks thought that it looked like a fortified site and was therefore a dún.  But the semantic drift of OG dún from its western (Irish) dialect where it meant only ‘fort, fortified site’ to its eastern (northern British) use as ‘hill’ is interesting, and munitio magna may shed some light on it.

BLITON   Alan James, ‘The Brittonic Language in the Old North’, an on-line resource at https://spns.org.uk/resources/bliton

Reeves, William, The Life of St Columba, founder of Hy, written by Adamnan, ninth abbot of that monastery (Dublin, 1857).