Welcome to the website for Iona’s Namescape: Place-Names and their dynamics in Iona and its environs

January’s Name harks back — potentially –to the early days of the month. 8th January is the feast day of a St Nechtan “of Neir in Alba” commemorated in two early Irish martyrologies; he might be the same as St Nathalan, whose feast was also on that day. He looks to be a saint closely associated with the North-East of Scotland. But he may be commemorated in Iona. 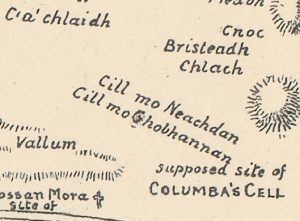 Cill MoNeachdain (Grid Reference: NM285247) is one of two small cellular enclosures to the north of the Cathedral. Reeves classified it as a cemetery; it remains unclear what its purpose was, though its name might suggest it once housed an early satellite church. The dedication is to a saint “MoNeachdan”, in earlier Gaelic Mo Nechtan “My Nechtan”. But which Nechtan, and what his association with Iona was, is just as unclear as the function of the feature which bears his name.

View full post and other names of the month

This is a three-year project funded by the AHRC and based in Celtic & Gaelic at the University of Glasgow. The core objective of the project is a survey of the place-names of Iona and the nearby island of Staffa. This will be presented in the form of an interactive web resource in due course on this site (planned to be ready for 2022); and in the form of a volume in the Survey of Scottish Place-Name series.

We will also be researching the early records for the topography of Iona; the names of Iona’s monuments; and the relationship between Iona and Mull. A key part of our research involves trying to understand the dynamism of names and naming in Iona, both over the centuries, and among the different constituent communities who live on and interact with the island in the present.

We are partnered with the two heritage bodies in whose care Iona and Staffa sit: the National Trust for Scotland and Historic Environment Scotland.

More detail about the project can be found here.

We will be producing regular blogs on our research which you can consult here.

This web resource is under construction and will be constantly updating as the project progresses.