Welcome to the first blog on the Iona’s Namescape website, which we are posting on 7th December, the traditional day of birth of St Columba, founder of the monastery of Iona.

The various members of the project team will be blogging from time to time about the work we are doing on the project, talking about things which strike us as interesting or problematic or worth giving a public airing. Sources, contexts, theories—and especially names—will be coming up. In amongst all this we hope to have a “Name of the Month” feature.

In this first blog, I thought I would use one place-name as an object lesson in why a survey of Iona’s place-names is necessary, what it can illuminate, and also the very specific problems which emerge in the context of Iona, with its rich history of individuals from different backgrounds speculating on its past, its monuments and its places. 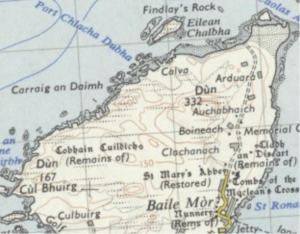 It is actually a bit tricky to be sure of the right way to renderthis place’s name. Over the past couple of centuries, maps, including those made by locals, have generally given it as Cobhain Cuildeach or Cobhain Cuildich, though neither are not what is on the present OS Explorer map (see below!). Here it is on the Ordnance Survey One Inch 7th series map from the 1950s (via the National Library of Scotland Map Images resource). ————–>

The name refers to a structure in the north-west of the island, in a less cultivated area some distance from the main settlement area. It is described on Canmore as a “small enclosure or structure of boulder construction which now appears as a setting 1.5m broad and 0.75m high, enclosing an area, 4.6m by 3.4 m, sub-circular in plan with an opening to the south. There is a small ‘alcove’ in the interior, to the east of the entrance.” It is not clear what age the structure is: once thought medieval, it could in fact be the remains of a more modern building. It is somewhat remarkable that such a small and out of the way feature should appear on so many maps, even on some which have comparatively few named places on them, like the one above.

Its fame lies in the supposed antiquity of the site, and that supposition is drawn from a misunderstanding of its name, subsequently elaborated. That it has been thought to be an antiquity is shown by the fairly consistent use of Gothic lettering for the name on Ordnance Survey maps—an issue we will need to come back to. The site is, as far as we currently are aware, first mentioned in 1795 by Rev. Dugal Campbell, author of the Old Statistical Account parish description for Kilfinichen and Kilvickeon, the parish in which Iona lies. Of it he said:

“One place in I [Iona] is still called the Culdee’s Cell†.”

Campbell’s description needs some explanation. There is no word in Gaelic cothan or cathan meaning “cell” or “couch”, so this is likely his rendition of the word cobhan or cabhan (this would not be an odd way to write the word at the time). According to Dwelly this can mean variously “box; coffer; hollow”, with cabhan more readily meaning “hollow, shallow valley”. This is the word found in Ireland in the name of County Cavan (Cabhán). In Early Gaelic the word was cobfán, “slope, hollow”. Where cobhan appears elsewhere in Scottish place-names it seems to refer to a topographical feature such as a hollow or slope (e.g. Cobhan Dubh, Edderton, Ross & Cromarty NH612865). The original name thus probably emphasised the situation of the site, rather than any built structure in it; the word cobhan really does not support Campbell’s translation “cell or couch”.

Campbell ventures into even more speculative terrain on the second part of the name, when he says that Cuildich, as he renders it, was the Gaelic word for “Culdee”. This, he says, is “a Gaelic word, signifying a monk, or hermit, or any sequestered person. Cuildeach is common to this day, and given to persons not fond of society. The word derives from Cuil, a retired corner.” The connection between a genuine word derived from cùil (e.g., cùilteach “sequestered, remote”; but alternatively, in Dwelly’s word, a “skulker”) and the word “Culdee” seems to be an invention of the eighteenth century. Campbell shares this idea with the Rev. James McLagan, author of the Old Statistical Account on Blair Atholl (OSA ii, 1792). There he speculates on the origins of the word kil- in Scottish place-names. Glossing the name Kilmaveonaig, he writes:

“Cella (Kella) sancti, or rather sanctae Eonog. Cuil and Ceal, signifying a sequestered corner, cave, &c. Those, who retired to such a place, were called cuildeach, plural cuildich; which they who spoke, or wrote Latin, turned into culdeus and culdei, altering only the termination” (pp.461-2).

This is wrong in a variety of ways which we can’t completely unravel here.

The word “Culdee” is in fact a Scottish elaboration of the Early Gaelic term céle Dé “servant, or client of God”. It is correct that this term was used for certain types of monks in early medieval Ireland; and also true that it was in use in medieval Scotland. However, as William Reeves long ago showed, this was not a blanket Gaelic term for early Christian clerics in Scotland. [Note 1] More to the point, cuildeach was not the Gaelic word for one of these individuals. W. F. Skene dismissed this as “a modern introduction into our Gaelic dictionaries, emanating from the nonsense about Culdees” (p.337). [Note 2] Reeves described Campbell and McLagan as “unfortunately help[ing] to obscure the subject by their etymological fancies” (p.73). He smelled James MacPherson at the root of these “fancies”, and he was doubtless correct about this. In MacPherson’s Fingal of 1762, to which is affixed a “Dissertation concerning the Antiquity, &c. of the Poems of Ossian the son of Fingal”, MacPherson writes: “These missionaries, either through choice, or to give more weight to the doctrine they advanced, took possession of the cells and groves of the Druids; and it was from this retired life they had the name of Culdees, which in the language of the country signified sequestered persons.” In the margin, this is glossed “Culdich” (p.vii).

As you can see, then, we are in the realms of romanticism in these speculations on the meaning of the word cuildeach or cuildich in the name of this place. In fact, as Skene spotted, we are almost certainly dealing with a much more prosaic word: cùilteach, an adjective meaning “retired, set apart, private”; or perhaps a noun derived from it, meaning “remote place, neuk”. As various commentators have discussed over the years, including debunkers in the nineteenth century likes Reeves and Skene, the name Cobhain Cuildich, probably originally Cobhan Cùilteach, is better translated “secluded hollow”. This is a lot more prosaic than “Culdee’s Cell” of course!

Skene did, it should be noted, try to salvage some antiquity for the site. He recalled that in Adomnán’s Life of St Columba, written around AD 700, we are told that the saint withdrew to a remotior locus, “a more remote place” to pray (VC iii.8). Could this not be the place, Skene asked? No doubt it could, but it seems incapable of proof. On the other hand, perhaps the name was given much later, by Gaelic-speakers aware of such stories, supposing this to be a place where Columba withdrew for prayer.

However, the Culdee interpretation gained legs, and seems very much to have influenced how it appeared on maps, particularly those of the Ordnance Survey. In the OS Six Inch 1st Edition in 1875, the name is rendered in Gothic script, indicating the belief that it was an antiquity. Not only this, but the name was transformed to Tigh nan Cuildich presumably intended to mean “House of the Culdees”, probably reflecting a partial retranslation of the meaning Campbell had attached to it. By the time of the Six Inch 2nd edition in 1897/1900 the name was back to being “Cobhain Cuildich”.

In the meantime, however, the romantic idea about the name had crystallised into an English-language version, “The Hermit’s Cell”. It is not yet clear to us when this first arrives on the scene as a name for the place, rather than a supposed translation, but it seems to be established by the 1930s, when D. Munro Fraser, in his appendix to the Ritchies’ map of Iona, gives: “Cobhain Cuildich† = Cabhan cuilteach. Retired hollow (The Hermit’s cell).” [Note 3]

Irrespective of the accuracy of its meaning, this English name has, essentially, its own existence now, and is displayed in tourist literature and the like. So, as people who research place-names and their origins, it is not enough for us to simply say “Cobhain Cuildich doesn’t mean ‘Hermit’s Cell’”: the name exists and we need to understand it and where it came from. And that story tells us a great deal, in fact, about the way in which Iona and its names have been subject to continuous reinvention and reinterpretation over the centuries, and particularly subject to romantic speculation on the early religious history of the island.

There is one further twist to the story of this name. As mentioned already, the name has since the nineteenth century been written on OS maps in Gothic letters, signifying an antiquity. Somewhere between the OS maps of the 1950s and the present-day Explorer map, someone misread the Gothic capital C as a Gothic capital T. This has caused the current Explorer map to render the name Tobhain Tuildich. Whatever about the meaning of the original name, this is completely meaningless. But it causes us a problem in the project. In order to have some standard form of place-names to use, the Survey of Scottish Place-Names has tended to use the Explorer forms for head-names where possible. But this rendition of the name isn’t some variant form: it is just plain wrong! 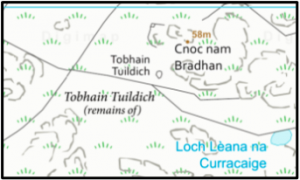 How should the name be rendered? There is good support for thinking the name here should be Cobhan Cùilteach “(the) secluded hollow”. In a recording from 1966, Dugald MacArthur (the grandson of the gentleman pictured above, and Mairi MacArthur’s father) pronounces it as Cobhan or Cobhain Cùildeach (it can be heard at the start of part 2 of the recording). There are few map forms which support these versions, and these also fail to reflect the long and complex history of guessing at the meaning behind the name. Perhaps then retaining the form as found on the Ritchie’s map, and on the OS Six Inch 2nd edition, Cobhain Cuildich represents a compromise between the name’s probable original meaning and that history? This is something we will need to debate in the project before coming to a decision.

This has been a fairly long first blog, on a small feature on the island. What I hope it does is expose the intricacies of the place-names of Iona; the feedback loop from the early Christian past of the island that seems so persistent in interpreting and even rendering place-names; and the problems of authority and authenticity—who gets to determine the “correct” form of this name? Which form of the name is “correct” in any case? And what do we mean by “correct”—faithful to the probable underlying Gaelic meaning? Or faithful to the dynamic traditions of the name?

[Note 1: William Reeves, The Culdees of the British Islands as they appear in history, with an appendix of evidences (Dublin, 1864)]

[Note 2: William F. Skene, ‘Notes on the history and probable situation of the earlier establishments at Iona, prior to the foundation of the Benedictine monastery in the end of the twelfth century’, Proceedings of the Society of Antiquaries of Scotland 11 (1874-1876), 330-49]